Photos by Nick Colmer, pictured above: Jeremy Rodriguez (front) and other members of the Fresno State Bulldog Marching Band.

You’ve witnessed the excitement building as you sat in the stadium – felt the vibration of the drums, watched the flash of red and blue flags twirling, and heard the undeniable hum of a Bulldog spirit song in the air.

The dedicated students who perform in the Bulldog Marching Band come from various backgrounds, representing nearly every academic major on campus. Participation is extra-curricular, with students committing six to eight hours of practice each week – in addition to their class work, performance and travel time. To recruit and retain the most talented students, scholarships are critical. 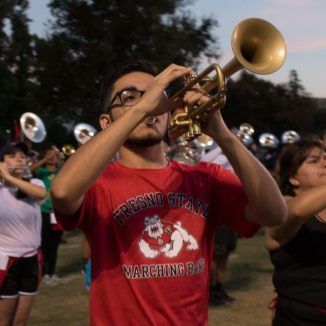 Sophomore Jeremy Rodriguez (pictured), a Fresno High graduate, plays trumpet with the Bulldog Beat, one of the smaller ensembles of the Bulldog Marching Band.

A music major, Jeremy has been playing trumpet since he was in fourth grade.
With Bulldog Beat, Rodriguez has had an opportunity to share his enthusiasm for marching band with high school students outside of the area. It meant a lot to him when students at schools they visited told him how much they enjoyed the performance.

Rodriguez began playing with the Youth Orchestra when he was in high school, under the direction of Dr. Thomas Loewenheim, who encouraged him to pursue his musical interests here at Fresno State.

With four siblings, the scholarships he has earned as part of the Bulldog Marching Band have helped to relieve some of the financial burden from his parents.

After he graduates, Jeremy plans to earn his teaching credential so he can share his love of music with younger generations at elementary and middle schools in the Central Valley. He also wants to earn a master’s degree in trumpet performance.

“Not only am I passionate about playing music, but I just want to help schools around my area get better,” Jeremy said. “It would be nice if kids from where I came from got to experience the benefits of music education.”

One thought on “Bulldog Marching Band helps build excitement, on and off the field”