In a sometimes emotional address during a celebration of the National Day on Writing at Fresno State, keynote speaker and alum Dr. Nicole Gonzales Howell said her time as a graduate student in the English Department at Fresno State was a “turning point” for her as a writer. 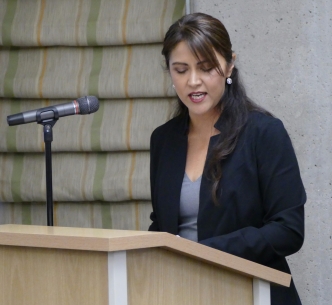 “As I read work from composition scholars that described the effects of disciplining students out of their home languages and into a specific kind of academic English … it was then that I could see what — not what, not what — that I could see who was missing. Most classes did not include Chicanas like me, or storytellers like me, or people like my family, my community, the people I respect and honor. They weren’t in these classes. It was no wonder it didn’t feel like it was for me. It wasn’t.”

Howell, a Fresno native, went on to talk about how Fresno State was a training ground for her as a writer. 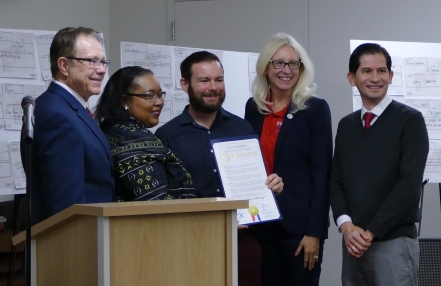 In the weeks leading up to the event, dozens shared posts and short videos on Twitter, explaining why they write. During the event, a screen displayed these posts, aggregated through the hashtag #FresnoStateWrites.

“Writing is essential. It’s critical,” said Caprioglio, who called Fresno State “the jewel of District 4.” “I read some of the things on the wall here and it’s really, really inspiring.”

Fresno State student writers and others who attended the event had an opportunity to share why they write on sheets posted around the room in the Henry Madden Library. 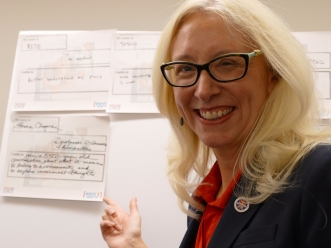 “Writing is about our humanity,” said Associate Dean Honora Chapman, pictured. On her sheet about #WhyIWrite, Chapman said she writes to “join a 5,500-year-old conversation about what it means to belong to a community and to explore innermost thoughts.”