~ By Lisa Maria Boyles, communications specialist for the College of Arts and Humanities

Fresno State has three 2017 Fulbright recipients, all of whom are from the College of Arts and Humanities. Two faculty members and a student have won the prestigious awards, which will take them to other parts of the world.

Alice Daniel, a lecturer in the Department of Media, Communications and Journalism, and her husband,  Dr. Benjamin Boone, a professor in the Department of Music, have been awarded Fulbright Scholar grants and will travel with their two sons, ages 13 and 15, to the University of Ghana to teach and do research during the 2017-18 academic year.

Tegan Jones, who recently completed her bachelor’s degree with a major in English and a minor in German literature and folklore from the Department of Modern Languages and Literatures, received a Fulbright Student Award and will spend the next year in Berlin, Germany, working as an English teaching assistant.

When Daniel was in high school, her father, a noted biologist, received a Fulbright to teach zoology at the University of Nairobi in Kenya. Going there with her family changed her life.

“We went to an international school there and befriended people from all over the world, people with whom I still keep in touch,” Daniel said. “That year still stands out as one of the very best of my life … I have these very poignant memories of driving an old Ford car on safari, taking the train to the coastal town of Mombasa at Christmas, seeing a herd of hundreds of elephants and interacting with Kenyans in various regions of the country. The experience was pivotal and it gave me a love of travel and a desire to learn more about the world.” 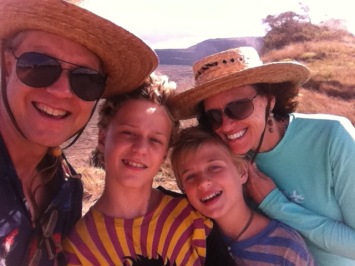 Daniel and Boone wanted that same kind of transformative experience for their two sons, ages 15 and 13, “to immerse them in another culture that’s vastly different than western culture so they can have greater empathy, and greater understanding of the similarities of people in different cultures. The way people live might be different, but people are essentially the same all over the world,” Boone said.

In considering where they wanted to go, Boone and Daniel looked at African nations with stable governments, universities that had programs in both journalism and music and were located somewhere that they felt the children could get a good education and had a good support system. “So Ghana was at the top of the list.”

Daniel and Boone each completed individual applications in the summer of 2016. The applications were evaluated independently, and they were “very lucky,” Boone said, to have both been awarded the distinction for the same year and the same destination.

“When you do a Fulbright, you are working for the State Department of the U.S. government, so essentially you are a goodwill ambassador,” Boone said. “Besides absorbing another culture and teaching, one of your main missions is to try and create connections with other peoples and other countries and to be friends so that we’re not others.”

Boone, who recently received Fresno State’s 2017 Provost’s Award for Excellence in Teaching, the university’s top teaching award, will teach students at the University of Ghana music theory, composition and improvisation.

The research component of Boone’s work will be collaborating with Ghanaian musicians on the composition and performance of new music.

“I’ve played with African musicians before and West African musicians, and the rhythmic complexity is something I haven’t wrapped my head around. There are multiple streams flowing simultaneously that somehow all operate together. … I’d like to understand it at an experiential level and not just a theoretical level.”

Part of the Fresno State Music Department’s five-year plan is to broaden the areas of music study by globalizing the music curriculum. Boone’s research will also complement that goal.

“Another interesting thing is West Africa is where the blues and western popular music have their roots. Being able to go back to the source of one of the musics that I love is deeply intriguing to me. In my dissertation I analyzed the speech of early blues performers, and I found a correlation between blues music and the speech of West Africans speaking English. That’s probably one of the ways that the blues came about – there’s something called ‘blue notes,” which are inflected notes that are idiomatic to blues music, and I found that in that speech. It will be interesting for me to hear the speech and the indigenous music and hear what links there are to blues and jazz music.”

While in Ghana, Daniel will teach radio broadcasting and print journalism at the University of Ghana, the oldest and largest university in the western African nation located along the Gulf of Guinea and Atlantic Ocean in the city of Accra.

Her research will focus on working with students to produce an oral history of radio broadcast journalists who were present and working during the transition in Ghana to a democratic republic in 1992. Prior to that, from 1982 to 1992, the media lived under a regime in which there was a culture of silence.

“To be a journalist was dangerous because of the newspaper licensing law, which discouraged the establishment of private media and freedom of the press,” Daniel said. “The 1992 Constitution ended more than a decade of military dictatorship, promulgating greater media freedom. And in July 2001, parliament unanimously repealed the Criminal Libel Law. The Media Foundation for West Africa said the law was ‘inimical’ to freedom of the press.”

The Fulbright Program is sponsored by the U.S. Department of State’s Bureau of Educational and Cultural Affairs, which works with the Council for International Exchange of Scholars to provide overseas opportunities for faculty and professionals. It is designed to increase mutual understanding between the citizens of the United States and the people of other countries through study, teaching and research.

The program is named for Sen. J. William Fulbright (1905-1995), D-Ark., an advocate for international education exchange programs. The Fulbright grants are highly competitive, boasting 310,000 U.S. and foreign scholars from 155 countries around the world, all of whom have participated in the program since its inception in 1946. 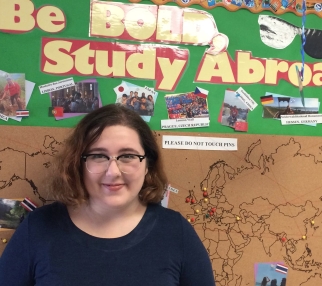 Jones, the Fulbright Student Program finalist, first came to the Fresno State campus at age 14, while she attended University High School. She later returned as an undergraduate.

“This opportunity is so special to me because it truly is a culmination of everything I’ve been studying,” Jones said. “I get to share what I know about the English language and literature, as well as getting to spend time immersed in the German culture that I’ve studied and loved.”

Jones plans to attend graduate school for her master’s degree when she returns to the United State in 2018. Ultimately she wants to teach high school English and perhaps college German classes.

“While I am personally excited and grateful to have this opportunity, what really makes me proud is getting to represent Fresno State, and do something to show the whole world what a great place Fresno State is,” Jones said. “I also want other students to know that if they’re interested in these types of programs, no matter how much of a long shot it seems, it is always worth putting yourself out there and trying to make it happen.”

“Every time I’ve taken a chance and pushed myself, there’s been a big benefit. I’ve always learned a great deal by taking a risk and venturing into the unknown. I hope to set an example for my students that when you take risks, when you challenge yourself, even if there are a lot of unknowns, the benefits are huge. I hope by doing this that I’m modeling that for my students to look, to expand their horizons, be challenged to apply for things they might not have considered possible.”