Almost 250 students and 37 teachers from 22 schools came to the Fresno State campus for the 37th annual Young Writers’ Conference on Wednesday, March 29.

At the opening ceremony in the Satellite Student Union, student writers learned who had won various prizes. The winning entries were compiled in a volume that was presented to all attendees. 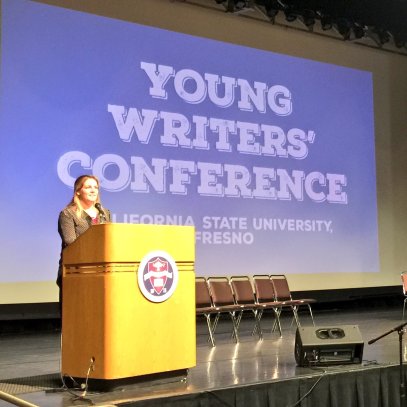 Kristin FitzPatrick was the keynote speaker. The author of the story collection “My Pulse Is an Earthquake,” published in 2015 by West Virginia University Press, FitzPatrick is an alumna of Fresno State’s Master of Fine Arts program in the Department of English.

FitzPatrick had two key pieces of advice for young writers:

“Always have a pen and paper. Be prepared for ideas to strike you at anytime. And carry a book with you everywhere – either physically or the memory of a great book.”

FitzPatrick was a semifinalist for the Mary McCarthy Prize in Short Fiction. While at Fresno State, FitzPatrick was named the Dean’s Medalist for the College of Arts and Humanities in 2009, and she taught youth workshops at the Young Writers’ Conference.

After the talk, students had an opportunity to ask FitzPatrick some questions.

One asked her when she discovered she was a writer – third grade, she replied, when she had a very encouraging teacher who allowed her to complete assignments in verse.

After saying that her favorite book is Homer’s “The Odyssey,” FitzPatrick told students to “write as often as you can, every day if possible. Practice your writing like it’s an instrument. It’s OK if it’s not great every day.”

Martin Lopez, a sophomore at Riverdale High School who has only been in the United States and speaking English for about three years, expressed his appreciation for the conference eloquently:

“Now I feel like I have the tools to create a fantastic story that will touch the hearts of everybody. The Young Writers’ Conference motivates you to keep expressing your ideas, and it gives you the tools to make them shine like the full moon in a beautiful night.”

After a break for lunch, students had a chance to take part in various writing workshops around campus. Topics included poetry, fiction and nonfiction. FitzPatrick presented a workshop for teachers who attended the conference.

“I love the Young Writers’ Conference,” said Peggy Nemeth, Lopez’ English teacher at Riverdale High. “My students see evidence that writing matters, and they get to experience life as a college student for a day.”