The sense of community that flourished at the Armenian Studies Program’s well-attended events made the Fall 2018 semester exceptional. Between the ceremony for the opening of the William Saroyan House Museum, a jazz piano concert, a CineCulture movie, and a series of riveting lectures, Prof. Barlow Der Mugrdechian, Berberian Coordinator of the Armenian Studies Program estimates well over 2,000 people attended their events.

“Armenian Studies continues to be the undisputed leader in the field,” said Dr. Saúl Jiménez-Sandoval, Dean of the College of Arts and Humanities.  “Thanks to the leadership of Prof. Der Mugrdechian and Dr. La Porta, the program engages the academy and our community with vibrant talks that illuminate Armenia’s rich heritage.  Our community has embraced the program with its support because the fruits of Armenian Studies are palpable:  students learn the relevance and lessons of history, while celebrating the rich literary and cultural production of Armenia.”

The program kicked off this Fall semester with the William Saroyan House Museum Grand Opening Celebration on Aug. 31. The event began with an exhibition that commemorated Saroyan’s life. The night continued with a film about the Saroyan House-Museum project, followed by musical performances and speakers and ended with a reception.

“The opening of the Saroyan House-Museum in Fresno marks an important milestone in the history of our community,” said Prof. Der Mugrdechian. “I am particularly happy that the main opening ceremonies will take place at Fresno State, since the Armenian Studies Program has had a long history of teaching courses on Saroyan and organizing numerous conferences dedicated to him. It is the right time for the opening of the house-museum.”

Over 700 people were in attendance at the opening and enjoyed the festivities with pride as the life of Saroyan was honored.

“It was an incredible event. The Satellite Student Union was filled to capacity as a steady line of speakers, performers, and videos brought William Saroyan to life and the author’s deep connection with Fresno and his family’s homeland,” said Benjamin Kirk, Communication Specialist for the College of Arts and Humanities. “After the ceremonies, the crowd moved into the warm summer night to celebrate on the lawn leading the Armenian Genocide memorial.”

Alongside the celebration of a local landmark, the Armenian Studies Program organized the exhibit “Genocides of the 20th Century.” 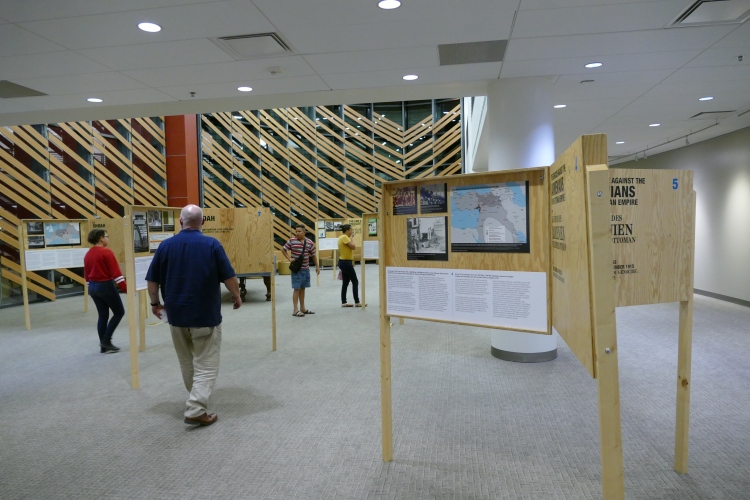 The exhibit included information about the Armenian Genocide, the Jewish Holocaust, and the Rwandan Genocide. An opening reception was held on Sep. 6 from followed by a special program. The exhibit ran from September 1-October 31, in the Leon S. Peters Ellipse of the Madden Library. The exhibition was introduced as a reminder of the importance of genocide prevention.

“Comparing genocides does not take away their specificities,” said Deborah Sinclair, Head of Touring Exhibitions for the Mémorial de la Shoah. “It leads to a better understanding of their mechanisms.”

The exhibit featured three major genocides of the twentieth century. It was also intended to stimulate the honor and recognition of others as well.

“All victims of genocide are entitled to the same interest, the same sympathy, and that should lead us to looking into other genocides,” stated Sinclair.

The Program put further focus on the Armenian Genocide as they hosted a lecture series given by Kazan Visiting Professor in Armenian Studies, Dr. Ümit Kurt as he presented his research.

The aim of the three-part lecture series was to locate and attempt to understand the motivations and actions of individuals involved in the Genocide in order to conceptualize how to potentially prevent one. As Dr. Kurt closed his lecture, he reminded those in attendance that “we have an obligation to try to understand how people can turn into killing machines.”

Alongside these academia-centered events, the Armenian Studies program showcased Armenian talent in the arts in the events for the Fall as well, including a concert by jazz musician Tigran Hamasyan and the movie “Roots” by film director Vahé Yan.

“It is encouraging to see so many students and people in the community enjoy our events. It is also interesting for me to organize a diverse set of events,” said Prof. Der Mugrdechian.

On Oct. 19 internationally acclaimed jazz pianist and composer Tigran Hamasyan performed in concert at Fresno State as part of the World Music Series in conjunction with the Keyboard Concert Series.

Hamasyan’s setlist displayed his wide range of skills and abilities. He not only performed on the piano but mixed several songs as part of the live performance. Hamasyan layered several tracks on a synthesizer and then would switch to the grand piano after building up the base of the song. After finishing this already impressive display, he added a final layer of his rich vocals. Each new addition left the audience in a state of awe, realizing the magnitude and diversity of his talents. After each new song, the audience responded with thunderous applause.

“These songs are musical observations about the world we live in now, and the weight of history we carry with us,” said Hamasyan of his most recent pair of albums.

On Nov. 2, the program co-sponsored the Cineculture’s screening of the international film  “Roots”, by Armenian director Vahé Yan with producer Lilit Martirosyan on Nov. 2. The film tells the story of a Boston-based journalist-blogger named Aram who decides to visit Armenia on the eve of the 100th anniversary of the Armenian Genocide in 2015 and cover the commemorative events on his blog. In Armenia, he meets Anet, one of his regular blog readers. The beautiful love story that emerges makes these protagonists’ ties with their native homeland even more profound.

To continue to celebrate Armenia’s rich history, explorer Steven Sim and producer Ani Hovannisian on presented their lecture on Nov. 13. Together, they delighted a standing room only audience with a fascinating presentation on “The Hidden Map of Historic Armenia.” Scotland-native Sim–referred to by some as the most-traveled modern explorer of the historical Armenian lands in present-day eastern Turkey, met with Hovannisian who was traveling through Turkey to discover her ancestral homeland. Together, they presented on their discovery found in an old Armenian house in Kayseri. A special screening of the video “The Hidden Map” was also shown at the event.

While each event has focused on a purpose, the collection has offered a multi-dimensional look into the rich culture Armenian-Americans bring to the Fresno State campus and beyond. From world-renowned literature, art and music to the societal and political lessons sought from a painful history; the Armenian Studies Program has attracted presenters and guest from all over the world.

“The mission of our Program has always included the dimension of integrating the community with the university, recognizing the role of the Armenian Studies Program as the intellectual center for the community,” said Prof. Der Mugrdechian.

The work of the Armenian Studies program continues with another full schedule for the Spring 2019 semester.

The Armenian Studies Program invites you to come to the campus and join us in this Inspiration for Life.