Fresno State is already talking about it. Especially in the halls of the Media, Communications and  Journalism (MCJ) wing of the Speech Arts building. Dr. Bradley W. Hart’s new book “Hitler’s American Friends, the Third Reich’s Supporters in the United States” has made Time Magazine’s “13 New Books Everyone Will Be Talking About This Fall” list.

The book, published by Thomas Dunne – Macmillan Publishers, is available through Amazon in hardcover and Kindle along with most other book retailers.

While many remember World War II as a time when the country came together for a common cause, Hart examines a more divided America before the war in which many citizens aligned themselves with Hitler and the Third Reich.

According to the book description, “Some of these friends were Americans of German heritage who joined the Bund, whose leadership dreamed of installing a stateside Führer. … They were even members of Congress who used their franking privilege—sending mail at cost to American taxpayers—to distribute German propaganda. And celebrity pilot Charles Lindbergh ended up speaking for them all at the America First Committee.

“We try to tell ourselves it couldn’t happen here, but Americans are not immune to the lure of fascism. Hitler’s American Friends is a powerful look at how the forces of evil manipulate ordinary people, how we stepped back from the ledge, and the disturbing ease with which we could return to it.”

“This book is about a forgotten piece of history. Before the Pearl Harbor attack, the United States was deeply divided between isolationists and interventionists, and this had a major impact on U.S. foreign policy. In addition, there was a strong under-current of pro-Nazi support that has been entirely written out of our history textbooks. This is an important story that deserves attention.”

What was your reaction when you found out your book was listed on Time Magazine’s “13 New Books Everyone Will Be Talking About This Fall”?

“I was pleasantly surprised! It’s a real honor to be included on a list with such notable and distinguished authors.”

How do you believe this book will be beneficial for students and/or Fresno State?

“I think this is an important story for our students to hear. We should not assume that Americans are somehow immune to the lure of fascism or dictatorship. Being a responsible citizen of our republic means one must remain politically engaged and aware of what’s going on in the wider country, regardless of one’s political views. Political disengagement only results in political dysfunction and gives bad actors more room to operate and undermine our system of government.”

What drew you to investigate right-wing Americans’ role in endorsing the Nazi regime?

“This project actually goes back a while, and really got underway in early 2015. At the time I was finishing up a project on the British far right of the era, and during that research, I discovered a number of international connections to the U.S. and other countries. As a researched further, I realized that there was an entire story here that has gone mostly untold until now.”

How did your initial focus transform, if at all, during your research?

“One of my most surprising findings was the sheer number of groups — and Americans — that supported pro-Nazi groups. Hundreds of thousands were members of pro-German organizations, while millions listened to Nazi-friendly radio commentators or were otherwise exposed to Nazi propaganda. As I dug further into this project, I was really shocked by how prevalent this stuff was during a really key moment in American history.”

What do you hope the public gains from the release of this insight into American citizens’ susceptibility to fascist forces?

“I think one of the most important takeaways from this book is the importance of American political culture to combat extremism on both sides. Several people I discuss in the book sought elective office, but were always defeated by their chosen political party before obtaining the nomination, usually at the encouragement of that party’s leadership. It’s really important that Americans are aware of the political positions of the candidates they choose to support. Similarly, political leaders have a responsibility to think about the candidates their party supports, and the possible implications that support might hold.”

New York Journal of Books calls the book, “…well-written and well-researched…Hart’s new book raises issues that are not limited to history. The streak in the American psyche for authoritarianism and racism is evident today. Hart’s Hitler’s American Friends should serve as a useful reminder of the calamity we must avoid.“

“This illuminating history will interest anyone who wants to know how nationalist movements succeed or fail,” said Publishers Weekly. 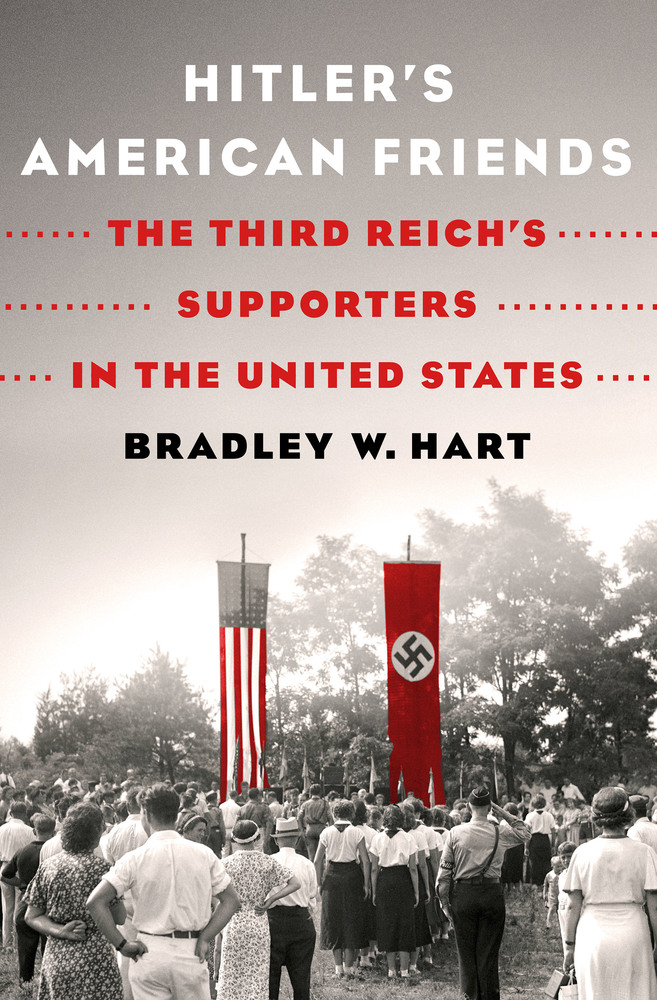 One thought on “Dr. Bradley W. Hart’s ‘Hitler’s American Friends’ makes Time Magazine list of books everyone will be talking about”