~ By Kaitlin C. Meier, student writer for the College of Arts and Humanities

It is from the support of our generous donors that the College of Arts and Humanities thrives in the ability to aid students through their academic careers with the establishment of scholarships, as well as in further developing our faculty, resources and facilities. This is why we are grateful in recognizing our supporters the Rev. David H. Brown and Linda M. Hammer-Brown, whose wonderful gift to the College will benefit many future students of the Department of Theatre Arts in becoming an endowed scholarship.

David and Linda Brown met in the summer of 1971 in Glacier National Park. Linda was moving to her first teaching position in Montana following her graduation from the University of Kansas with a degree in Language Arts. David was working as a bellman and student minister in the national parks.

On their first official date, they decided to see “Oklahoma!” at Bigfork Summer Playhouse in Montana in what became the beginning of their shared love for theater.

“I knew anyone who liked theater was probably a keeper. We were married the next summer,” Linda said of her connection to David through theater.

After being married, the couple decided to see one new play for each month of their marriage. The plays are not always consecutively one-a-month, but their goal has been to add at least 12 new plays to their list by Dec. 31.

“We have kept an on-going list and have now seen 651 different plays together,” Linda said. “We are ahead of ourselves as far as plays seen and months married. Some years have been very beneficial!”

Linda has enjoyed theater all of her life either in seeing plays or dressing up and pretending to be a character in a story. She also helped her husband become more involved in the acting side of productions.

David said having his career in Christian ministry has led to enjoying the sermon illustrations that have often appeared in some plays, as well as loving a chance to laugh or take his mind off of all that goes on in the world during the theater experience.

The Browns came to Fresno in 1986 so Linda could work on a master’s degree in education of the deaf at Fresno State. She put her degree to work, teaching deaf children for 25 years for the Madera County Office of Education, where she incorporated theater experience for her students in performances that were all done in sign language.

Since coming to the area in 1986, the Browns have been season ticket holders for the University Theatre here at Fresno State, as well as longtime patrons beginning in 1989.

“During our 25-plus years as patrons of the University Theatre, I have always thought the performances were top rated,” David said. “Many of their plays are not afraid to take on challenging subjects that we, the public, need to deal with.”

Those within the Theatre Department are also thrilled to recognize the generosity of this couple:

“For many years Rev. David H. Brown and Linda M. Hammer-Brown have attended numerous University Theatre productions, and this past season they so graciously offered to create an endowed scholarship to financially assist our students,” said J. Daniel Herring, chair of the Department of Theatre Arts. “We are thrilled to be able to offer another valuable scholarship and are especially delighted that it honors two of our longtime patrons and supporters of the department.”

Dr. Saúl Jiménez-Sandoval, dean of the College of Arts and Humanities, believes this scholarship will have a large impact for the program moving forward:

“The Brown’s generosity will transform the lives of future generations of students, all of whom will promote a more inclusive society, a deeper understanding of who we are and a reflection on our future — all through the love of theatre.”

David and Linda support a variety of local and national nonprofit theaters, as well as having acted in the community theaters of Sheridan, Wyoming, Fresno and Merced.

Local groups performed with are Good Company Players, the Woodward Shakespeare Festival and the Merced Shakespearefest. Some of Linda’s favorite plays that she has seen with David include; “A Doll’s House,” “Godspell,” “Damn Yankees,” “Cats” and “Macbeth,” among others. Pictured below is the couple’s performance in the Merced Shakespearefest production of “Henry V” with David as the Bishop of Ely and Linda as the Bishop of Canterbury. 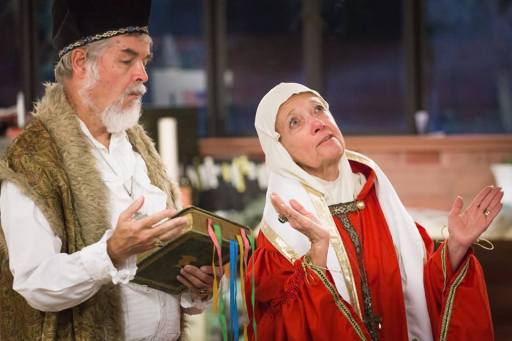 Linda most recently acted in the Merced Shakespearefest production of “Taming of the Shrew” and she, along with David, plan to participate in more productions in the future and will celebrate 46 years of marriage in July.

The Browns look forward to the benefits that the donation will create for students:

The new theater scholarship established from this donation will provide access to the tools and resources needed to further student education for recipients within the department.

“We will award this scholarship during the next academic year, which will honor the Brown’s love of the theatre and support our students in their creative activities and academic course work in the theatre arts,” Herring said.

The Brown’s generous gift will go toward a scholarship endowment, created in December, that will support students majoring in Theatre Arts. The award will enter the annual scholarship process this fall.