Our College transforms the lives of our students and raises the quality of life in our Valley thanks to the support of people who believe in our mission. Gifts to the College allow us to provide scholarship support to students, enrich the development of our faculty, and build our resources and facilities.

To that end, Dennis and Cheryl Woods have made immeasurable contributions, as alumni, volunteers, and donors. 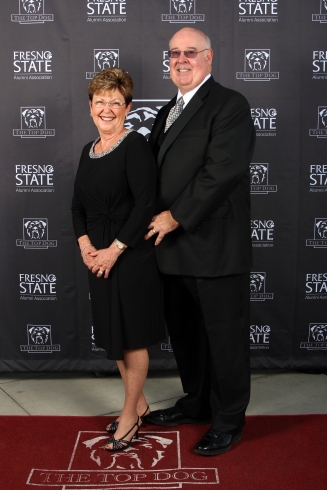 Dennis Woods, a native of Fresno,  received his bachelor’s degree in English from Fresno State in 1969. He met his wife, Cheryl, while attending Roosevelt High School. Dennis and Cheryl have two children and five grandchildren.

During his years as a student at Fresno State, Dennis, who was married and worked several jobs, felt he missed out of a big part of “the college experience.” He’s been making up for lost time ever since then, with his involvement as an active member in the Alumni Association.

“Once I graduated, I became a lifetime member of the Alumni Association and tried to find ways to make a connection with the College,” Dennis said.

Dennis planned to teach English after college, but a unique business opportunity presented itself – he and a childhood friend became co-owners of Hestbeck’s Supermarket, with Dennis at the helm, for 23 years. Then in December 1987, Dennis became a founder of United Security Bank. As a successful businessman and banker, Dennis attributes a large part of his success to the lessons he learned as an English major –good communication skills, the ability to read and interpret the world, and analytic skills.

Dennis and Cheryl are deeply committed to the San Joaquin Valley, Fresno State and the College of Arts and Humanities. He has been active in the Bulldog Foundation, was inducted into the Pinnacle Society, has been named Mr. Bulldog 22 years in a row and received the Lifetime National Fundraising Award. He also spearheaded the construction and financing of the bronze bulldog at the Save Mart Center.

In 2006, Dennis was asked to help find donors for the Arena Theatre upgrade project.

“I was asked by one of the development people, Katie Zenovich, if I could find someone who would give a gift of $250,000 to renovate the Arena Theatre with the opportunity for a $250,000 matching grant,” Dennis remembers. “I went home and talked with my wife, Cheryl, and because our son had been a music student at Fresno State and then moved on to Juilliard for a career in opera, she agreed that we should just make the gift ourselves.”

The Woods made the gift of $250,000, which triggered a matching gift from the Harry C. Mitchell Trust. The trust was established to “forward the cultural advancement of the citizens of Fresno.”

In honor of the Woods’ contribution, the Dennis and Cheryl Woods Theatre was dedicated with its new name, in honor of the Woods’ contribution, in October 2007. The 190-seat theatre, formerly named the Arena Theatre, has used the donated funds to undergo improvements, including new lighting, sound and stage equipment. The green room was also remodeled. Other improvements, using what is left of the donation, are still in the works.

“The Woods have been great friends of the Theatre Department,” said J. Daniel Herring, chair of the Theatre Arts Department. “We appreciate their support and value their generosity wholeheartedly. The great thing about it is it came at a time when things were moving toward more computerized lighting, and we’ve been able to upgrade the sound. We can do better and more artistically satisfying productions in the theatre now.”

The advancements in lighting and sound incorporated into the theatre with the renovations raise the production value significantly over what the department could do previously. This doesn’t just raise the bar for students in the Theatre Arts Department, but it also improves the theatre-going experience for every member of the community who comes to see plays and performances here.

Other renovations included flooring that was replaced and seats that were re-upholstered. All of these improvements add up to a better experience for theatre patrons. They also give students in the program the opportunity to work in a state-of-the-art environment like they might encounter when they go into a professional setting.

One element of the renovations directly benefits the students. The green room, outside of the theatre provides a space for students to gather, not only before and during shows but at other times during the semester.

“We are the envy of many departments and students on campus when they find out that we have that communal place for our students to gather both for social time but also for academic time to do study groups together or projects together,” Herring said. “The importance of that green room has elevated our students both personally and professionally. They really do have the opportunity for it to be sometimes just a social atmosphere, but other times for it to really be a space where they can study and engage with one another around academic projects.”

In 2013, Dennis Woods and Omel Nieves were co-recipients of the Arthur Safstrom Service Award at the Top Dog awards banquet for their role as co-chairs of the Campaign for Fresno State, which raised more than $214 million in support of scholarships, faculty, programs and facilities.

“I have learned that there is a large group of people willing to support our University, and a great deal of them never attended our school,” Dennis said. “One of the main successes we had in our capital campaign was engaging the deans in fundraising. They had never had that as part of their job descriptions. When we explained that they are providing the workforce to all of the businesses in the region and if they asked industry to become their financial partners, it would be a win win for everyone. It was the single thing that pushed the campaign over the ($200 million) goal. and it was thrilling to watch the deans seize the momentum to exceed our goal by $15 million.”

Anyone can give back. Gifts small and large add up and they all make a difference for our students and for our broader community.

“The final thought from me is about getting comfortable with philanthropy,” Dennis said. “Whether you volunteer your time on a committee, mentor a student, or write a check, as I was taught by Bud Richter, ‘those of us who have a little extra should give a little extra.'”

One thought on “Featured supporters – Dennis and Cheryl Woods”