Two new musical compositions will have their world premiere in the Concert Hall at Fresno State on Saturday, Oct. 29 at 8 p.m. The compositions focus on two historic visionaries – Nikola Tesla and Ada Lovelace. 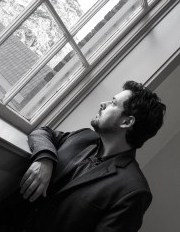 The concert will be preceded by a free talk at 7 p.m. with composer Dr. Kenneth D. Froelich, a professor of theory and composition in the Music Department.

Tesla and Lovelace were both figures way ahead of their times. Tesla (1856-1943) was a Serbian-American inventor, who contributed to the development of the alternating-current electrical system widely used today. His “Tesla coil” is still used in radio technology.

The first song cycle is called “In My Mind’s Eye: Songs of Nikola Tesla,” featuring tenor-baritone Constantine Pappas and two-channel electronic accompaniment. The texts were written by Allison Armerding, and they alternate from the perspective of Tesla as an inventor and other moments that deal with his difficulties with depression.

“The piece, from a musical perspective, really does borrow from both traditions of classical music as well as from modern electronic music,” Froelich said. “So you have this blending of these two genres being sung by an operatic singer. The end result is a score that merges the aesthetics of classical art song and modern electronic music into a wholly unique dramatic song cycle.”

The other song cycle is “Finite Differences: Songs of Ada Lovelace,” featuring soprano Ann Moss and the Hausmann String Quartet. The texts for this piece were written by John Grimmett.

Lovelace (1815-1852) was a gifted mathematician, and is considered to have written instructions for the first computer program in the mid-1800s.

“This one has a very concrete structure, where the songs alternate one after the other between the dual identities that Ada Lovelace had between being a computer scientist, an inventor with this mechanical, mathematical mind, but then also the fact that she is the daughter of Lord Byron,” Froelich explained. “So she also had this wishing to fly – that’s a phrase that occurs many times throughout the song cycle, she has dreams, flights of fancy. She never actually knew her father. Lord Byron left her mother when she was a baby. And he died shortly thereafter. So she always had this yearning to know more about her dad. So the songs alternate between being mechanical, rigid songs and these songs which are quite lyrical and lush.”

Tickets are $15 general, $10 for employees and seniors, and free for students. Details are available at http://fresnostate.edu/artshum/music/concerts/index.html#October2016