For the first time, the College of Arts and Humanities will celebrate the current and former Top Dog honorees of the college at a luncheon Friday during Homecoming Week.

“The Top Dog honorees from our college have made immeasurable contributions to our college campus and to our broader community, through their distinguished careers, volunteer work, philanthropy and leadership,” said Saúl Jiménez-Sandoval, dean of the College of Arts and Humanities. “It is humbling to see the breadth of all they have accomplished in their lifetimes. We wanted to honor that by thanking them.” 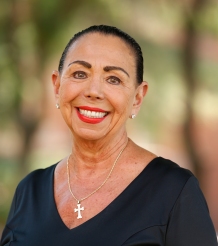 This year’s Outstanding Alumni in the College of Arts and Humanities is Dr. Janice M. Emerzian [English and Biology, 1969]. She has made her mark professionally, serving as the director of Disabled Students Programs with the State Center Community College District. She travels the nation speaking, teaching and advocating for people with disabilities. Dr. Emerzian has taught at Fresno State, Fresno Pacific University and UCLA and has received numerous distinctions in her field. (Read more here.)

Previous honorees are listed below.

College of Arts and Humanities