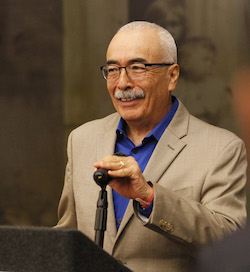 Fresno State’s Center for Creativity and the Arts presents the “Elotes con Sangre, the Journey Home, Photographs and ‘Neirikas’ (yarn paintings) of the Land of The Wixáritari, First Peoples, the Huichol Nation of Mexico” exhibition from Oct. 6 to Oct. 21.

The opening will be part of ArtHop, the open house of galleries and studios in downtown Fresno and the Tower District on the first and third Thursday of each month. An artist’s reception will be held from 6 to 8 p.m. on Friday, Oct. 14 to honor the US Poet Laureate, a former Fresno State professor.

The gallery is open to the public from noon to 4 p.m. Wednesdays through Saturdays, and from 5 to 8 p.m. during ArtHop on Oct. 6.

“Through the exhibition, viewers are able to appreciate the beauty of Huichol life and traditions,” said Cindy Urrutia, director of the Center for Creativity and the Arts. “Viewers of multiple and indigenous heritages, like Herrera, are also able to connect with certain aspects of their indigenous roots.”

The exhibition is 46 years in the making and answers the question, “Who am I?” that Herrera asked almost 50 years ago, said Cindy Urrutia, director of the Center for Creativity and the Arts.

“For Herrera, ‘Elotes con Sangre’ is deeply personal, yet it transcends his intimate journey home and search for identity,” Urrutia said. “Through the exhibition’s photographs and Nierikas, the beauty of Huichol everyday life, their harsh economic conditions, material culture and cosmological artistry are seen.”

“We knew we are more Indian than Spanish, but we did not know our story,” Herrera said in a recent interview. “We can’t go back to pre-Spanish contact, but we can connect to the Mexico that was.”

Herrera was born in Fowler to migrant farmworkers. As a farmworker, Herrera and his family constantly moved from San Diego to San Francisco. Much of Herrera’s work details his experiences and how he constantly moved from city to city, often lived in trailers or tents and attended several schools while growing up. Despite the challenges, he earned degrees from UCLA, Stanford University, the University of Iowa and an honorary doctorate from Fresno State.

From 1990 to 2004, Herrera worked as a professor in Fresno State’s Chicano and Latin American Studies Department and in 2015 he was appointed as the United States’ 21st poet laureate, becoming the first Latino to hold the title. He was reappointed in April to a second term.

In May, Fresno State President Joseph I. Castro awarded Herrera with a Doctor of Letters degree in May in recognition of his poetic influence in shaping cultural ideals and the human spirit.

The Center for Creativity and the Arts serves a hub for arts in which artists from a variety of backgrounds can work to stimulate public engagement through inquiry, discussion and understanding.

We have truly turned the corner! Students and faculty are back on campus more than ever since 2020, and the University celebrated the investiture of President Saúl Jiménez-Sandoval, our former dean and Professor of Spanish and Portuguese, with a joyful ceremony in September. We are also celebrating the 100th anniversary of The Collegian, the Fresno State student newspaper produced under the auspices of the college.